This article is loaded with very important information about the international banking system, the gold market and China’s current activities. The insights about how the international monetary system operates are very revealing. Jim Rickards is one of the most sought after monetary experts in the world and I have been following his work for a long time. Pay close attention to what Rickards says -- http://bonnerandpartners.com/weekend-edition-why-most-gold-bugs-are-dead-wrong/
Posted by The Country Cogitator at 9:37 AM No comments:

You May Be a Little Different 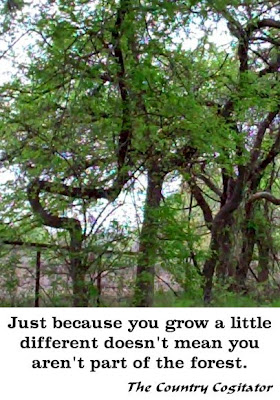 Posted by The Country Cogitator at 1:42 PM No comments:

Can't Do What You Don't Know

Posted by The Country Cogitator at 1:39 PM No comments:

Can the Political-Financial Power Complex be Redeemed?

Back in the eighteenth century, Voltaire wrote that, “With Great Power, there must also come Great Responsibility.” Stan Lee echoed the sentiment in his first Spiderman comic book in 1962. Recent financial leaders have shown no such affinity toward responsibility. Instead, the Big Six bank leaders exercise a historically dangerous power while enjoying Washington’s full ideological and financial support with no strings attached. Lax regulators, politicians eager for lucrative private sector jobs after public service and we taxpayers, subsidize them. Their firms’ fraudulent practices transcend borders. During the past three decades, America’s most elite bankers have worked strategically to bend the banking system, the laws, and the federal government to support their supremacy. Read the complete article at -- http://www.tikkun.org/tikkundaily/2015/04/08/can-the-political-financial-power-complex-be-redeemed/
Posted by The Country Cogitator at 8:27 PM No comments:

● Power consists of persuasion or force.

● Persuasion is when the cause of movement or action comes from within a person or thing.

● Force is when the cause of movement or actions from outside a person or thing.

● The promise of a reward or threat of harm is a form of persuasion.

● Physically pushing someone or something from one place to another is a form of force.

● Laws are a form of persuasion.

● A prison is a form of force.

● Money is the greatest instrument of persuasion.

● Money only exists by persuasion.

● The larger the number of people that act together, the greater the power.

Become aware of the power matrix in which you and the rest of us live. Many uses of power are done in the open, but many others are being done in stealth through mass communication systems and social media without our being aware of them.

Cogitate on this for a while!

Does Your Pharmacy Have the Same Problem as Cleburne’s Walgreen Pharmacy?

As I rounded the corner to head down the aisle to the pharmacy, I saw the dreaded sight – a line that extended across the aisle I was on and across part of the next aisle. So, I changed my course and moved over to that aisle so I could intercept the line and find my place at the end. Once in line I realized it would probably not be as bad as I first though because there were only four people in front of me – for some reason they decided to keep a safe distance of about 4 ft. between them.

You know how it is when you submit to “the line.” Our senses start taking in everything in our surrounding – probably inherited this from our ancestors who wanted to make sure there were no mountain lines or rattlesnakes close by where they were waiting in line for a drink of water. This makes us really good at spotting potential threats – and I did. Over to the left there were four people sitting in chairs waiting on prescriptions and outside the drive thru window there were two cars. We were all looking toward one spot – and that spot was occupied by one young woman. There were ten of us all looking at her!

I quickly noticed that she was looking somewhere too – back in the pharmacy where there were three or four other Walgreen employees staying business and making sure they made no eye contact with us.

After about 25 or more minutes standing in line, I made it to her – provided the usual stuff – name, address, DOB. She went over and picked up a bag and handed it to me and told me to put my info in the system. When she told me the price I asked her if that was correct, it was only about half what it was supposed to be – and then it happened. She looked in the bag and there was only one bottle. Then she went back to the computer and clicked and said – they only filled one prescription. With a strained forced smile she said – “Would you like wait for us to fill it – in about another 30 minutes?”

That’s when I decided this Walgreen pharmacy has a problem. A problem is an existing situation that fails to meet values and expectations.” So I analyzed the situation and came up with the following options for what the problem is:

(1) Customers are less important than other things.

(2) Employees that interact with customers are too expensive to hire.

(3) Too many customers show at once.

(4) Too many customers show up at the wrong time.

After cogitating on this highly important situation I reached this conclusion – This Walgreen Pharmacy must have too many customers!

What do you think? Got any suggestions?

Secret Meeting, Too Big to Fail & Too Powerful to Prosecute

What would you think if a CNN Breaking News announcement interrupted the regular program and a reporter appeared announcing that the US Assistant Secretary of the Treasury, a US Senator, and five high level officers of the largest banks in America had been discovered secretly meeting to create a system in which private banks would take control of the entire monetary system of the USA?

In November 1910, CNN did not exist, but the meeting described above took place. The men traveled by private train to a private resort owned by J. P. Morgan at Jekyll Island off the Georgia coast. Those present were:[i]

(6) A. Platt Anderson, Assistant Secretary of the Treasury of the United States.

Warburg’s plan proposed the creation of the Federal Reserve Association, an association with twelve member banks whose stock would be owned by private stockholders. The Federal Reserve Association would control the nation’s money and credit; it would be a bank of issue, meaning the private bankers would be able to create currency or money at will, and it would finance the Government by securing credit in times of war. Senator Aldrich later admitted the agenda in a magazine article:

Before passage of this Act, the New York Bankers could only dominate the reserves of New York. Now we are able to dominate bank reserves of the entire country.[ii]

Contrary to what many Americans believe -- the Federal Reserve System is not a government agency. It is a private corporation completely owned by commercial banks. What do you believe is their top priority – making the most money or increasing the quality of life for the most Americans?

The one thing I can’t figure out is why so many Americans have bought into the mantra – “the less government regulation the better off America will be.” Who do you think benefits the most from less regulation? Could it be –

Or, as US Attorney General Eric Holder said:

"I am concerned that the size of some of these institutions becomes so large that it does become difficult for us to prosecute them when we are hit with indications that if you do prosecute, if you do bring a criminal charge, it will have a negative impact on the national economy, perhaps even the world economy."[iii]

Now that’s the ideal situation for an elite few – but I don’t think it is what the Founding Fathers had in mind when they created our great nation. Tocqueville predicted that if American citizens failed to voluntarily associate together to achieve great things by participating in the governing process, the following will happen:

(1) Wealthy and powerful men would come to control the governing process and use it to increase their power and wealth.

(2) Individuals will become powerless because they dependent on wealthy and powerful individuals.

(3) Freedom and liberty will be in great jeopardy and the existence of the nation will be endangered.

Cogitate on that awhile!
The Country Cogitator

Translate Our Blogs Into Your Language